Dominion scales are the representation of the effect that the belief in one’s pretender god affects not only the populace but the very fabric of a province. When creating a pretender, you choose the way in which your religious belief changes the cosmic forces in provinces where your dominion holds sway. 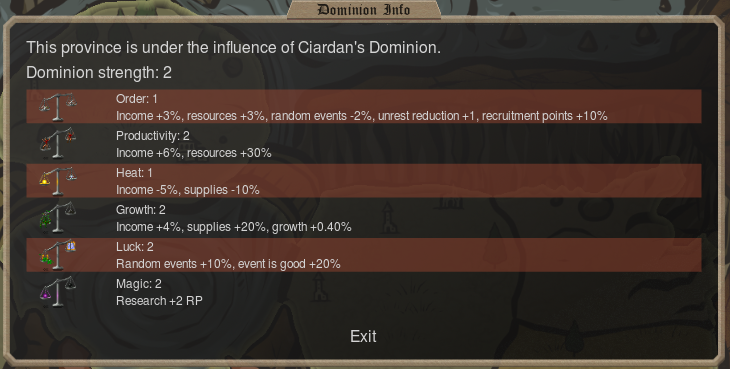 Each scale has a favorable side and an unfavorable side. For example, Growth is the favorable side of the Growth/Death scale. You can guess which side Death is. For each tip of the scale, bonuses or penalties accrue to the province under the sway of that dominion.

You can gain extra points for pretender creation by choosing unfavorable scales. Scales tip both ways, which is why they're called scales.

Scales are influenced by magic sites in a province, even if the site has not been discovered. Random events can often cause temporary changes in scales, as well as some events requiring certain scales to occur.

The Event system interacts a lot with the scales. The following interactions have been observed so far: 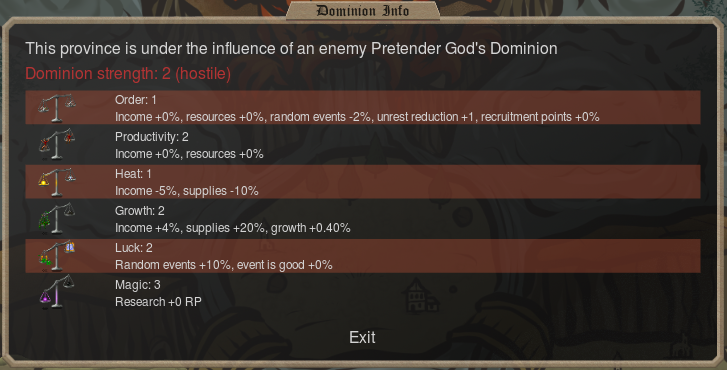 Your opponents' dominion spread their hostile scales, just as your dominion spreads yours. No difference is made in how scales came to be, be it from friendly dominion, hostile dominion, random events, magic sites, etc. However, scales affect a province differently depending on whether the current dominion is friendly or hostile, i.e. if the candles are white or black.

A general rule of thumb is that you only get negative effects from scales in hostile dominion. The growth scale is the exception to this rule.

Temperature fluctuates according to the season. In general winter will reduce temperature by 1 and summer will increase it by 1. In midwinter and midsummer temperature will decrease/increase by an additional scale. Because of these fluctuations temperature does not consistently cause its income loss effects of 5% per scale. Over a period of 12 months, you will suffer the following income loss if you are at your preferred tempature.

Note that because scales are multiplicative, not additive, this table is just an approximation(See the FAQ below for more details)

The chosen scales also affect the game in a few other ways:

When you create your pretender, the dominion scales you choose will spread with your dominion. This does not all occur at once – if you have Order 3, provinces with low friendly dominion may only gain Order 1 or 2. Over time, they will reflect your chosen scales. Each turn a province has your dominion in it there will be a small chance for each scale to tip one step towards your chosen dominion. The chance for this to happen is (5% multiplied by the dominion level in the province) plus (10% multiplied by the difference between the actual scale and your nation's scale).