When a province is selected, you can see its attributes in a box in the upper left corner of the screen, provided that you have some way of gaining this information (either through scouts or the proximity of friendly provinces). If you don't have any way to gather this information, all you'll get is the map number of the province. You'll always be able to tell which type of terrain a province has, even if it is on the opposite side of the map. Most information about a province will be unavailable unless you actually own it (it is friendly to you, displaying your national flag).

If you have dominion over a province, you will be able to see its income and name, even if you do not control it. Once you have scouted a province, the province name is remembered and you can always see it even if you do not have friendly units in it. For more information about how much information you will receive on any given province, see Scouting and Scrying on page [37]. The province attributes shown in the main province screen break down as follows:

Terrain is shown in the upper right of the province info box. It is very important to determining how valuable that province will be in terms of income, resources, supply, and magic sites. Farmland tends to have high population (and therefore income) but low resources and few magic sites. Mountains tend to be just the opposite. Mountains, forests, swamps, caves and especially wastes are more likely to contain magic sites. Terrain also allows or restricts multi-province movement. See the section on Movement.

There is a major distinction between land and underwater provinces. Underwater provinces cannot be entered by units without a special ability that allows it (such as amphibian, aquatic, or water-breathing), they do not contribute resources to fortresses on land and cannot be crossed by flying units. Units with sailing may cross water provinces, but may not remain there at the end of a turn.

EFFECTS TO BE DISCUSSED/PRESENTED: (in table format or other options)

Note: Mountains / Highlands need to be clarified: illwinter switched in some patch how it worked ( Border mountained are now mountaines, and Moutains became Highlands. TO BE CONFIRMED PLEASE) 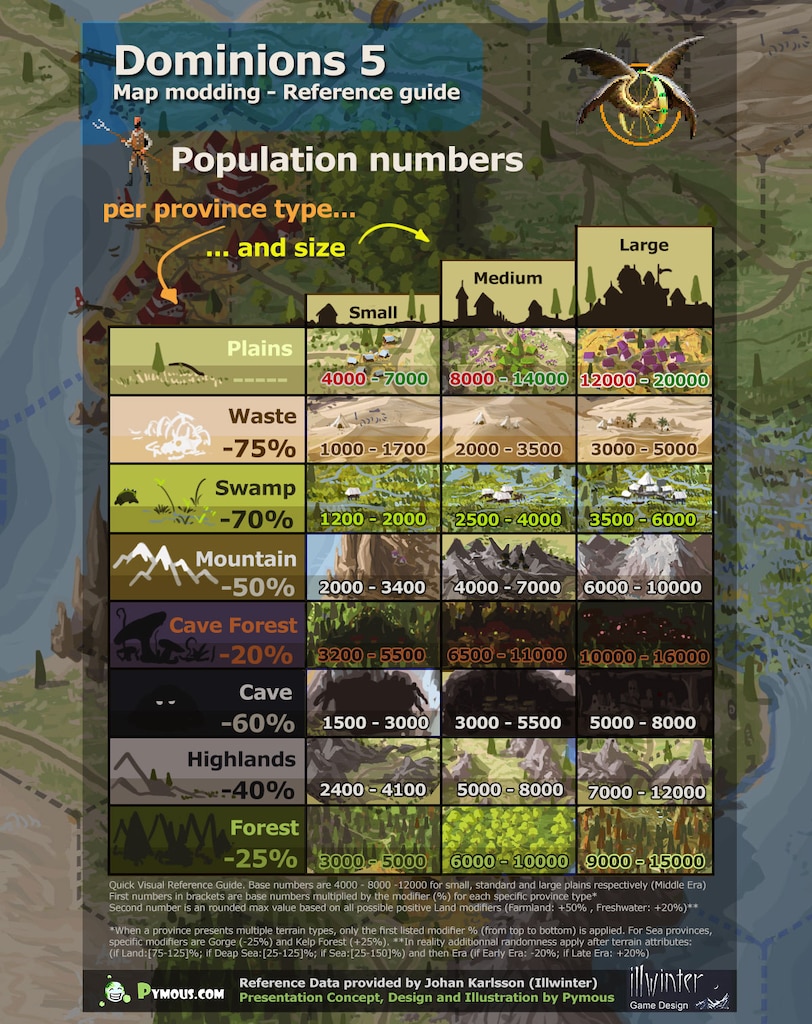 Population determines income, and is affected by many factors: Growth/Death scales, patrolling, dominion, pillaging, and random events. The population in a province sets the base income from that province:

The population has an effect on:

A province contributes its income rating to the owner's treasury every turn. Income accumulates in the treasury. The number shown is after all modifications. Income is determined by multiple factors, including population, dominion scales, fortress administration, and unrest. The basic formula is

If the province has unrest, this number is Final

If a province cannot trace an unbroken line of friendly provinces back to a friendly fort, it does not produce income that turn. Taxation requires communication.

Note: Speaking of taxation, note that while the process of income collection is referred to as taxation here, there is no explicit "taxation" mechanism or button in the game. This is a change from previous Dominions games, where you could set the level of taxation in each individual province. This is no longer the case. Taxation back then was not so easy.

The resource value of a province, representing raw materials needed to make weapons and armor. Resources are reduced by unrest, like income. Resources are collected by forts from neighboring provinces. A province only produces half of its potential resources for use in that province unless it contains a fort. The number shown is the number actually being produced, not the potential.

Building a fort in a province greatly increases the number of resources available there. A fort draws resources from adjacent owned provinces according to it's administration rating. If multiple forts draw from a single province first the relative allocation for the province itself is reduced to feed all forts, if they draw >100% the contribution to each is reduced proportionally to not make the province "magically" produce more resources.

Resource has an impact on:

Unrest in a province causes a variety of effects, which are detrimental in most situations. In particular, province Income and Resources are reduced.