A Beginner's Guide to playing Dominions 5

Hello my friends. This is Maerlande. I started this guide in January 2020 and got very stumped. But it's mostly my work. I have some collaborators that will hopefully join in. The hard part is that I have played Dominions for over a decade and it's not easy to remember the new player challenges. There is a talk page and you can find me on Steam or many of the discords with your questions. We will try to add them into the guide. Please see the talk page for the scope and goals of this guide.

Recently new players have been commenting that it's hard to find the lingo and slang used a lot discussing the game. This wiki page is a good start and feel free to post questions in the discussion page. Commonly Used Shorthands

Your first step will likely be to decide if you want to play alone, in single player (SP), or with other human beings, multiplayer (MP). A common idea is try playing the game on basic difficulty in single player with a nation you like to get a feel for the core ideas of the game. There are many long time, even expert players, who only play SP. Preferably, our community does not disparage that choice as it's fully valid and includes players who helped in the beta test of Dominions 4 and 5.

Let's get started with single player.

Your first step is start Dominions 5 and choose "Create World." 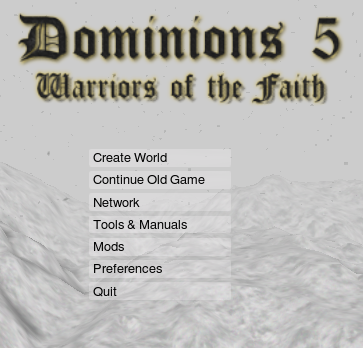 That leads to choosing a map. A few maps are included with the bare install of the game but not many. You may want more maps. There are two ways to add maps to your game.

The choice of era determines which version of each nation group you will play although there are a few single age nations. The choice has the following general effects:

This is mostly your taste or something that grabs your interest. Know that the Late Age plays somewhat differently from the other two, however, since it has much fewer nations and much tougher expansion (for most of its nations) than the other two Ages.

This is largely a matter of choice although it's possible to sum up a few basic recommendations. Some types of nations and magic are significantly more difficult and beginners may want to leave them for a while. It is a large topic to list nations by ease of play and popularity and is a issue with a lot of subjectivity that generates many long discussion in the community. I have a couple rules of thumb for nations that are easier to play as a beginner.

Some simple suggestions may help for beginners. A list of nation categories (archtypes) has been prepared which will help to choose. The list of types is at the bottom.

Here I'll quickly cover the settings that really matter for a new player.

Events are affected by many factors and it can prove fatal under certain circumstances. Let's agree that, to begin, you might want to focus on the game itself, and not lose by turn 4 (or turn 2 with Early Age Mictlan) because you played with fire in the settings. :)

The game includes a nice feature to make reviewing each nation quick. From the "Choose Participants" screen in starting a new game, after you have set your nation, click "Ok" and a screen opens with your nation shown with the lore, a summary of it's key features and icons for all the commanders, units, and sites. A feature many do not know when new to the game is that each of those icons has a tool tip giving most detail about the unit. Click on any icon to open a detailed description. And most of the listed statistics or attributes can be clicked for more detail. Try it out. 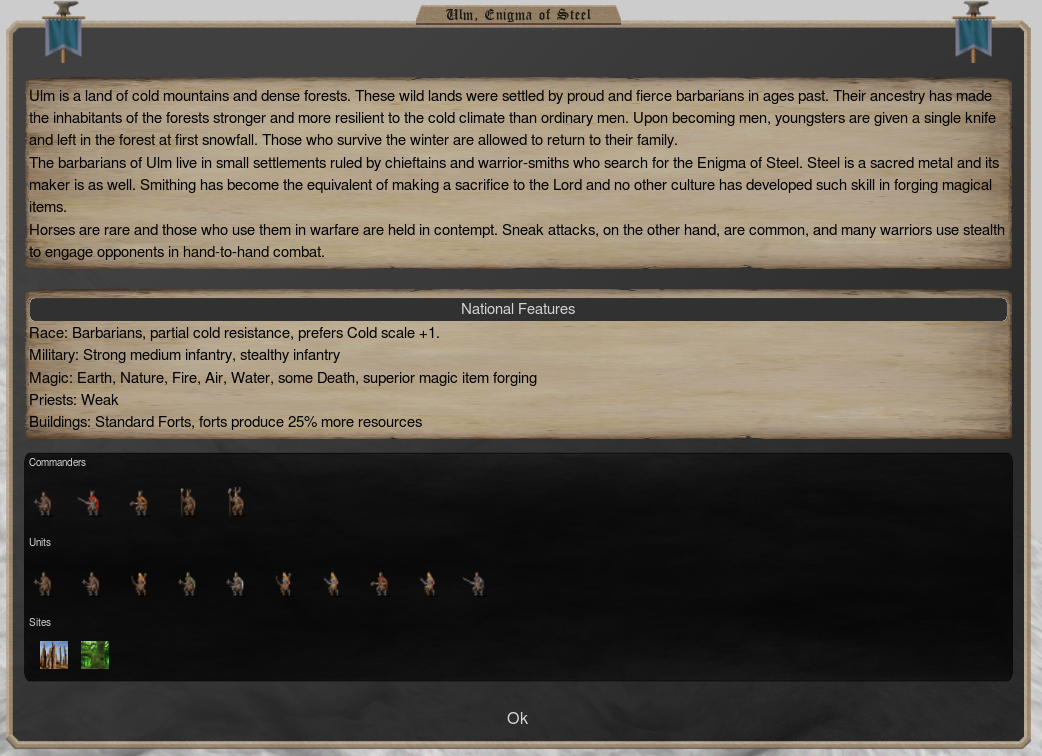 Dominions is a rather asymmetrical game - and perhaps the biggest strategical choice you'll make is your choice of nation. Most game rules are adhered to by each nation, but some have particular rule-breaking features which make them particularly difficult for new players to understand.

For your first few games I recommend picking a nation that is both non-underwater (check the tooltip in the nation select window), and does not use blood magic/sacrifice. ~~ avoids most(?) special-rule nations such as Mictlan and pop-kill Bone White

Inspecting each of your units is important for you to understand what your nation can (and can't) do. There are hundreds of different abilities, stats, weapons and armour that individual units can have, but the important ones for new players to consider are:

sacred commander or unit can receive your Pretender's bless. Sacred units are often the most powerful, and the most expensive units your nation can recruit. A few nations have really cheap Sacred units and/or far-better troops for expanding, however, so check that carefully.

A Priest commander has a

priest level of 1 or higher, and can bless sacred units in combat. This gives them the same bless you choose in Pretender design (below), making them quite powerful. Level 3 Priests can also claim Thrones of Ascension and lay down powerful Smite spells.

Commanders can also have one or more levels of magic, also known as paths. These commanders allow them to cast Combat Magic during combat, and Ritual Magic from the safety of their Laboratories. Not counting the Priestly path, there are eight different Magic paths to keep your eyes open for:

Magic users can also Research, which is important to increase your nation's power over the course of a game.

Some races are adept at flying, others can travel across rivers or underwater. Your nation summary will likely brief you on the key features of your nation.

Each nation's strengths, synergies and weaknesses are subjective, and if you wanted to know more detail about your chosen nation, then find a guide for your specific nation, either on this wiki, or ~~ list other guide locations here ~~

Awake Pretenders with an Expander build are a good choice for your first game. This allows you to have a combat-suited Pretender from turn 1 that can help you expand and explore more of Dominion's mechanics from the start, such as Thugs and Supercombatants and Combat Magic.

You can find many suggestions for your Pretender's build on individual guides for that race, but in general a Dominions 2 Monster Chassis is usually a simple and effective start. Pick one you like, give it some magic and add a Bless or two.

Note that your pretender will only receive your bless if you are attacking or defending a province with your Dominion.

For later games, feel free to mix up your Pretender design. This is often done in consideration with a nation's Power Curve – for example, if your troops are good against early-game opponents, you might want to pick an Imprisoned pretender, with more magic levels to cover your weaknesses in the mid-to-late-game, or with a ton of beneficial Scales on your Dominion to make more troops right away!

Your first priority will be [expansion] – capturing land from independents (indies) – and setting up basic infrastructure.

Almost all nations start with a scout plus a commander with a small army. If you've chosen an awake pretender, you will start with it, too. On your first turn, you will generally want to recruit more troops and designate one of your starting two commanders as your prophet.

On your second turn, once you see what the indies around your capital are, you can start expanding.

There are essentially three ways to expand; you should pursue all of them that your nation is capable of:

Pretender expansion: Many pretenders, such as dragons, are capable of taking many indie provinces solo. If you have chosen one of these and it is awake, it can clear provinces on its own. Beware of Barbarians and Heavy Cavalry; these things do enough damage to threaten even pretenders. Don't dump your pretender on Lizards, either, they have Shamans that can afflict your pretender with an annoying, permanent

Sacred expansion: If your nation has powerful sacred troops, and you have chosen a strong bless, they can often clear indies even if they are heavily outnumbered. Since the limiting factor for sacred troops is often holy points, rather than resources (which are in short supply very early), heavily-blessed sacreds can be excellent early expanders. In particular, sacred cavalry and centaurs are excellent at this.

Troop expansion: If your nation has strong troops in general, especially those that do not cost too many resources, you can use those to expand. This is easier with good scales, in particular production. If you are expanding with troops and are at all limited by resources, it is a good idea to clear the provinces adjacent to your capital quickly to get more resources.

As you begin expanding, you will generally want to begin producing mages from your capital as soon as possible and setting them to research and/or search for magic sites. If you are new to Dominions, the magic system may seem intimidating. The best way to learn is to experiment with it!

Other guides for Beginners by our players

Pretender Design and Analysis by Maerlande

Content is available under CC BY-NC-SA 4.0. The Illwiki Dominions 5 wiki is not affiliated with Illwinter Game Design.