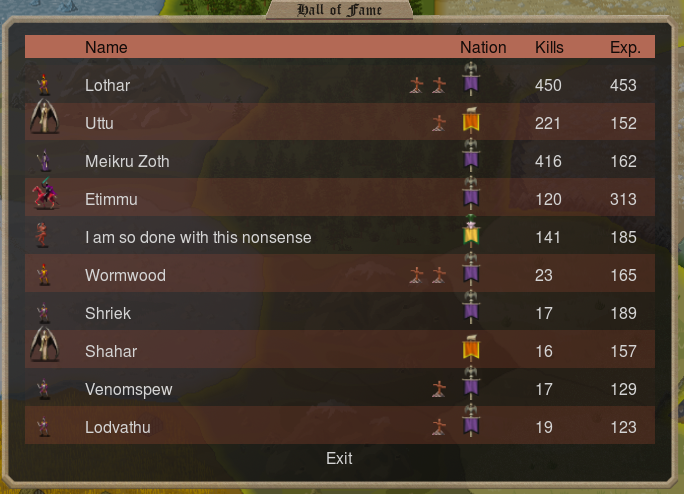 The most famous commanders in a given game of Dominions are recognised by admittance into the Hall of Fame (HoF). Each commander in the Hall of Fame receives a Heroic Ability which continuously improves as long as they remain in the Hall of Fame. These heroes are not to be confused with national heroes which may randomly appear in the capital by chance.

Who is considered the most famous is decided by their number of kills, experience, afflictions and deaths. All commanders can get into the Hall of Fame, except for Pretenders, the God Vessels, the Legion of Gods, and monsters with the #unique tag, such as elemental royalty.

Qualifying for the Hall of Fame

To enter the Hall of Fame, a commander must have acquired a minimum (

) HoF score. This score is calculated as follows:1)

Affliction Score is one point for each affliction (including disease) or lost weapon/bodypart, except feebleminded/dementia which only count as one point even if a commander has both.

This calculation determines the order in which heroes are displayed in the HoF. It is possible for heroes to be ousted from a full HoF if they are already the lowest-ranked hero and a non-hero is able to accrue more score than them.

Heroic abilities scale according to the hero's assigned Ability Value, which continuously increases as long as the hero remains in the Hall of Fame. The Ability Value starts at 100, and increases by a variable amount each turn depending on the current value as shown in the table below (all dice non-exploding):

When a commander enters the Hall of Fame they are given a single heroic ability. There is a 5% chance to be given one of the rare heroic abilities instead of a common. Ability Value is abbreviated to "Value" for the purposes of calculating the strength of these abilities.

Further effects from being in the Hall of Fame

ritual of rebirth, the eyes of god, that double prophet trick