Magic Sites are present across the map from games start. Most sites are initially hidden, though there are some that are revealed as soon as a province is taken. Sites are revealed by using the "Search for Magic Sites" action of mages or through the use of remote site searching spells (e.g. Dark Knowledge).

Most sites provide their owner with gem income, though they can also provide recruit-able units/commanders, bonuses to ritual spells, spreading disease, and other effects on a province. Diligent site searching can greatly increase your gem income and let you break into magic paths that your nation may not have.

Other than their effects magic sites have a rarity, level, and a set of terrain tags. The rarity controls how likely a site is to spawn, with rarity 0 being the most likely and rarity 2 being the least likely. The level determines how skilled a mage needs to be to find the site. The set of terrains controls where the site can spawn and if the site is unique. Mixed terrains appear to be able to spawn any site available to any of their individual terrain types.

Some site effects apply even before the site has been discovered. These include:

The information below is taken from this analysis of magic sites. Please visit this guide if you are interested in the full numbers and a more detailed explanation than those below.

3 sites may be found on land; the only

4 site is unique, and may be found in a Waste.
There is only one underwater site with path greater than

3 site which may be found in a Sea.

3 sites may be found on land; only

4 site is unique, and may be found in a Plain.
Though infrequent,

2 sites may be found in Seas, and a single

1 site may exist in Deep Seas.

All terrains may have

3 sites except for Deep Seas, which (perhaps ironically) cap at

4 site is unique, and may be found in any land provence.

3 sites may be found everywhere, though underwater there are few possible

3 sites. There are two, unique

Caves and Deep Seas have up to

3 sites; there is a relatively common (rarity 0)

4 site, the Unfound Door, which may be found in any other terrain except Wastes. There are five unique

4 sites; two may be found in a Waste, one in a Mountain, and two in any non-Cave land provence. The only

3 sites may be found in all terrains, except Deep Seas which cap at

1. Several sites spread disease; in the Army Setup menu for a provence (Hotkey: 't'), the Hotkey 'd' will select all diseased troops - a sudden outbreak of disease may indicate a hidden site. There are two unique

4 sites; one may be found in a land provence, the other only in a Mountain (this one spreads disease, and so may be detected by an observant player).

3 sites may be found everywhere, save Seas and Caves (which cap at

2) and Deep Seas (which cap at

1 site, the Kelp Fortress, may be found in coastal underwater provences and creates a free fort. There are three unique

4 sites; one may be found in a Forest, one in a Waste, one in a non-Cave land provence.

Blood sites are never found underwater. On land, all terrain types may have

3 sites, though Caves only have access to a single, rarity 2 (though non-unique) site. There are two unique

There are few Holy sites; all land provences may contain up to

3 sites, while underwater provences cap at

1 (Deep Seas have access to only one site, at rarity 0). There are two unique

4 sites, both of which may be found in non-Cave land provences.

Each magic path contains at least one ritual spell for finding magic sites. Casting a remote site-searching spell on a friendly province reveals all sites of the targeted path, regardless of level. The spells are:

Reveals all Air sites. Cannot target sea or target provinces across the sea.

Finds all Water sites. Can target enemy-held provinces, but cannot target underwater provinces. Other nations with commanders in the province will also be notified of the discovered sites.

Finds all elemental sites, but can only target underwater provinces. Other nations with commanders in the province will also be notified of the discovered sites.

Locates all Earth sites. Can be cast underwater

Reveals all Astral sites. Can be cast underwater.

Finds all sites, but is very expensive. Can be cast underwater.

Locates all Death sites. Can be cast underwater.

Reveals all Nature sites. Can be cast underwater.

The following pictures show expected gem income when sitesearching provinces with only one tag in Early, Middle and Late Age at default site frequency settings. 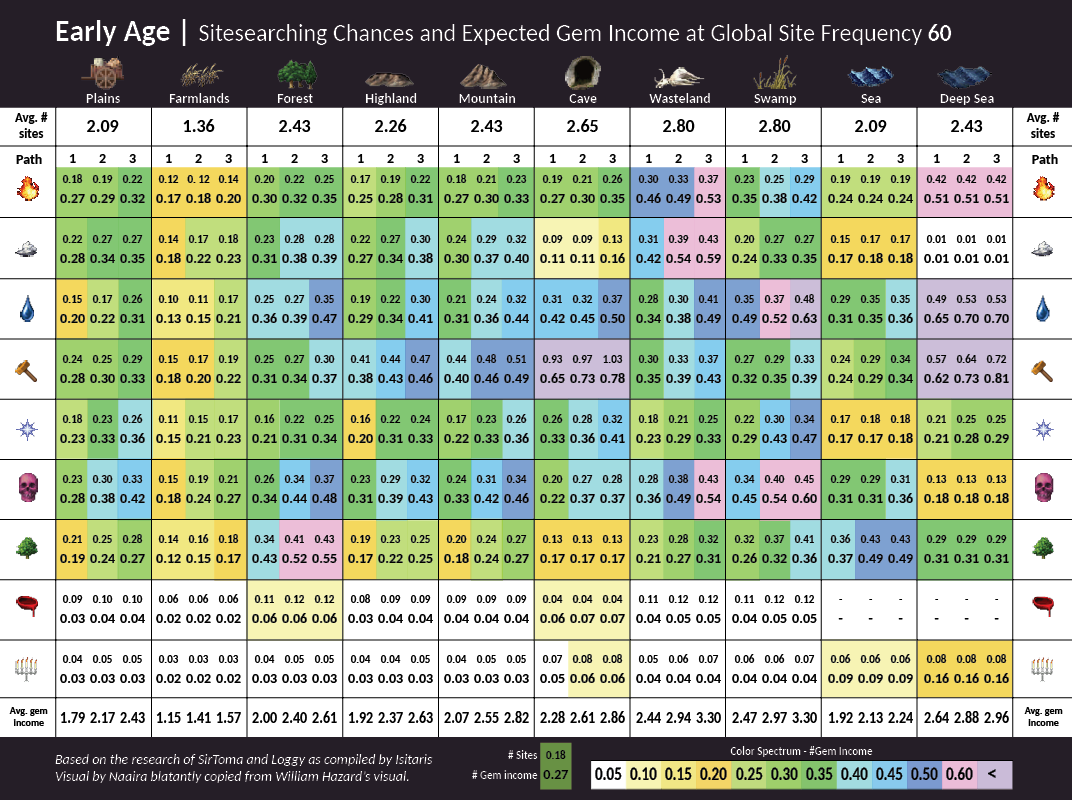 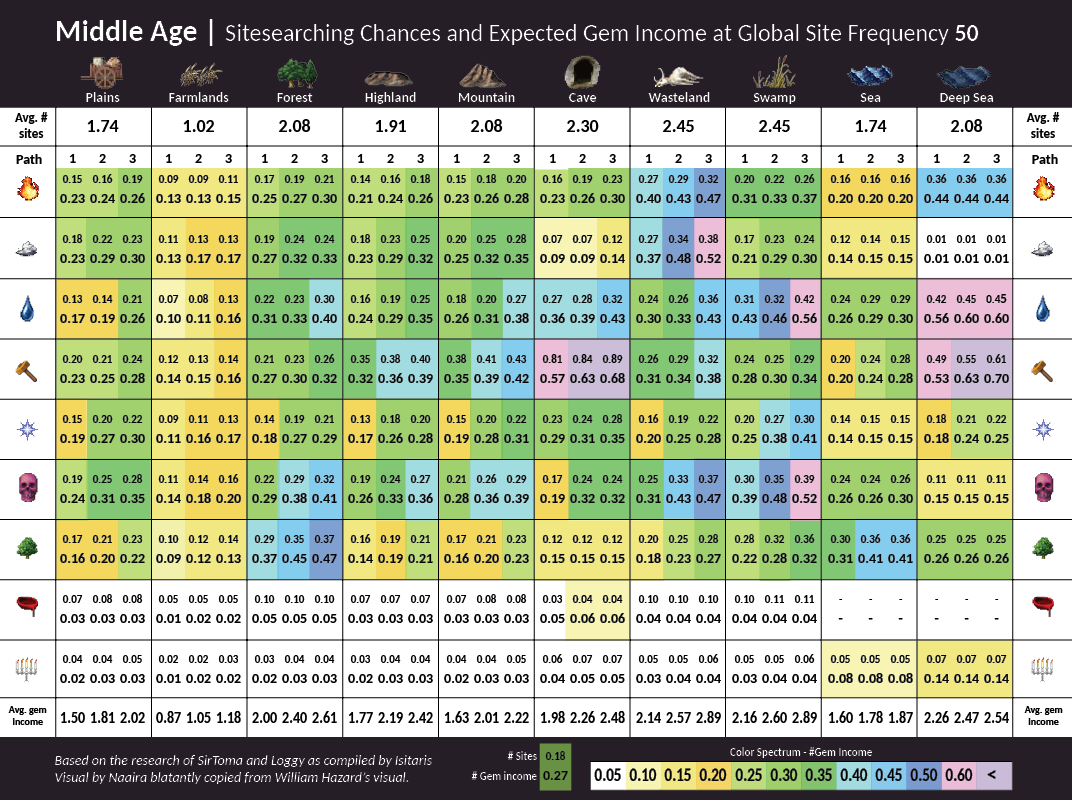 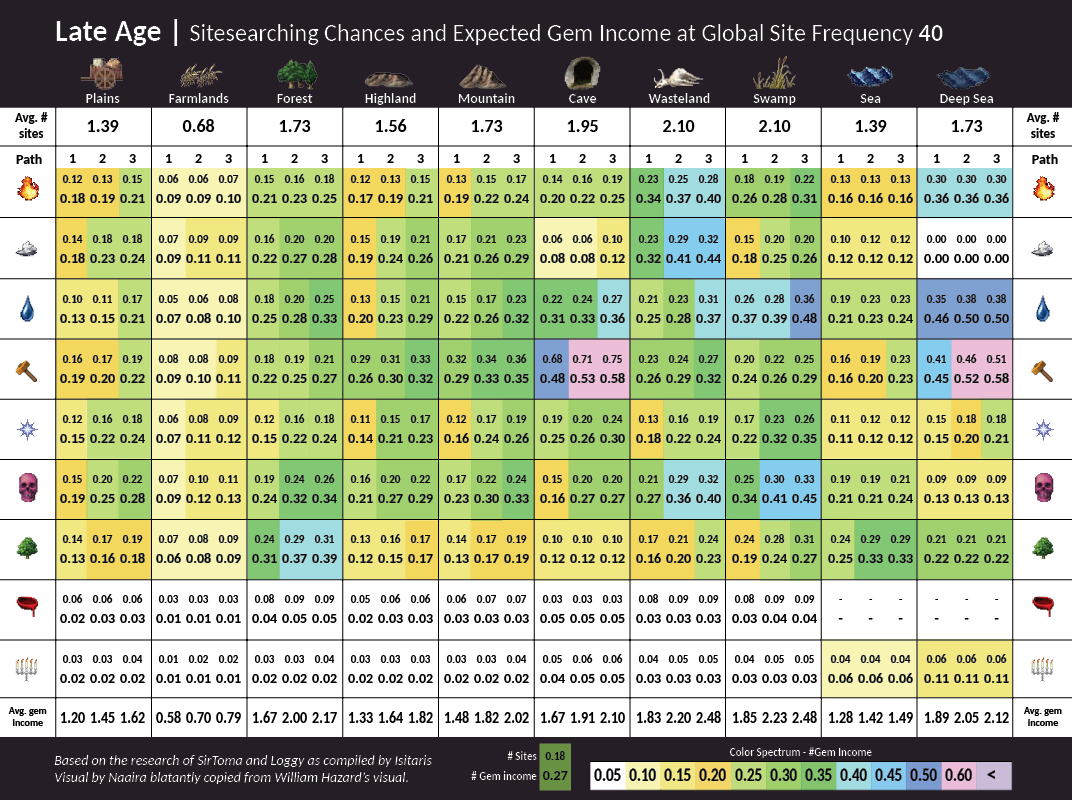 Based on large numbers of experimental analysis, it has been possible to gain a rough understanding of how magic sites are generated on the map. Each province has a magic site frequency, which is the sum of the global site frequency (determined at game creation) and a terrain specific modifier. Generally (but not all the time), the most positive terrain modifier takes precedence in the case of provinces with multiple terrains.

Higher site frequency is associated with more magic sites: For each province, the initial chance to spawn a site is global site frequency + terrain frequency modifier. It repeats this process until it has made 8 rolls, but the chance of each subsequent roll generating a site is 75% of the previous. For example, if a province had an initial chance of 80 to generate a site, the second roll would have a 60% chance, the third 45%, the fourth 33%, the fifth 24%, the sixth 18%, the seventh 13%, and the eighth 9%.Therefore provinces with a high site frequency are almost guaranteed to have a few magic sites, but it grows increasingly uncommon for sites to have four or more.

Additionally, sites have an assigned rarity, which is detailed in the inspector tool. The odds of each rarity site spawning following a successful roll are as follows:

Certain rarity 5 sites may spawn naturally. The odds of these spawning is currently unknown, but they do appear to be rather rare. These sites have unique independent pretenders which are always present guarding the site. The list of rare independent types lists these, along with other special independent spawns.

Additionally, some sites are flagged as unique, in which case the game can only place one of them.