Magic Duel is an early-game combat spell that any astral mage can cast at Evocation 3 for one pearl. It pits the caster and a random opposing astral mage in a duel which will always leave one or both dead. This spell remains impactful throughout the game as it makes any astral mage vulnerable. The very existence of this spell is a consideration if taking astral paths on a pretender which might be desireable as a super combatant, as it provides a very cheap unresistable means to kill any non-mindless astral mage with a little luck. 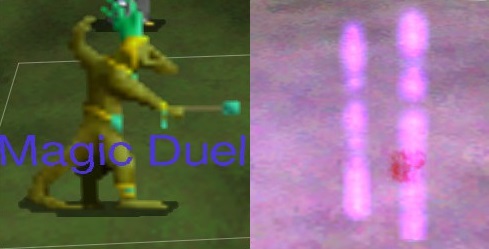 When Magic Duel is cast, a random astral mage in the opposing army is targeted. Both mages roll a single six-sided die and add it to their base astral path. This is one of the few rolls in the game that do not use the DRN. The mage with the lowest sum dies immediately. If the sums are tied, both mages die.

The astral path is not boosted by any means: Item boosters like Crystal Coin or Skullcap or spells like Power of the Spheres and Light of the Northern Star do not affect the outcome. Having empowered a mage does boost its base path.

The negative path boost of trinities at pretender creation will apply to Magic Duel, while the path loss from splitting them up is not counted for the purpose of base paths.

Mandarbmax has made a spreadsheet calculator for magic duel odds. magic_duel_calculator.ods

Ways to use Magic Duel